It would be recalled that Ajia had, on September 6, issued a seven-day ultimatum to the State ANRP Chairman to apologize over his alleged defamatory statements against him.

The former ANRP guber candidate had, through his counsel, Dr. Ahmed Isau of Earl Legal Services, also demanded among other things, a retraction of Ade Alabi’s “libelous remarks” as well as issuance of a public apology which must be published in two Nigerian dailies within five working days upon receipt of the letter or face legal action.

The State ANRP Chairman however, urged Dr. Ajia to do the needful by approaching a court of law if he felt his character had been maligned in any way.

Alabi added that he had merely volunteered his honest opinion regarding the “political activities and practices during the last election” while reiterating his earlier assertion that Ajia had jumped to the ANRP during the build-up to the 2019 election “convinced in his mind that he had found a platform where the usual practices of political jobbing thrives until he met a tenacious resistance of such act.”

Alabi maintained that the ANRP, “is not a platform for pseudo, phony and opportunistic individuals which he (Dr. Ajia), by his dispositions and conducts while he was in our midst, is purely one of such characters.”

In his reaction, Ajia through a statement issued by his lawyer, Dr. Isau on Friday, revealed the status of the defamation case instituted against Mr. Ade Alabi in the Kwara State High Court, Ilorin.

In a suit filed on September 23, 2019, Ajia prayed the court to compel Mr. Alabi to pay the sum of N200 million as damages for his libelous remarks.

He also asked the court to direct the Kwara ANRP chairman to issue a public apology to be published on the website of ‘Insiderng.net’, one National Daily Newspaper, and two local newspapers circulating within the jurisdiction of the court.

The statement read: “It is no longer news that on 4th September 2019, Mr. Ade Alabi, the Kwara State Chairman of the Abundant Nigeria Renewal Party (ANRP) granted an interview to ‘insiderng.net’ wherein he made various defamatory and libelous remarks against the personality of Dr. Abdulmumin Yinka Ajia.

“It would be recalled that Dr. Abdulmumin Yinka Ajia caused his Solicitors, Earl Legal Services, to issue a cease and desist letter to Mr. Ade Alabi and to demand a retraction of the defamatory and libelous remarks made in the said interview.

“Accordingly, a case was instituted before the Kwara State High Court on 23rd September 2019. The case is claiming amongst other things against Mr. Ade Alabi the following:

“AN ORDER OF THIS HONOURABLE COURT compelling, directing and mandating the Defendant to pay general damages to the Claimant for the libelous remarks made against him by the Defendant in an interview granted to ‘Insiderng.net’ on 4th September 2019.

“AN ORDER OF INJUNCTION restraining the Defendant either by himself, his agents, servants and/or privies or otherwise, howsoever, from further making any libelous remarks whatsoever to defame, disparage, malign or impugn the personality of the Claimant in any news platform or other platforms.

“AN ORDER OF INJUNCTION restraining the Defendant either by himself, his agents, servants and/or privies or otherwise, howsoever, from further harassing and bullying the claimant on the world wide web or other platforms.

“AN ORDER OF THIS HONOURABLE COURT directing the Defendant to retract the libelous remarks made against the Claimant in an interview granted on 4th September 2019 to ‘Insiderng.net’.

“AN ORDER OF THIS HONOURABLE COURT compelling, directing and mandating the Defendant to issue a public apology to the Claimant to be published on the website of ‘Insiderng.net’, one National Daily Newspaper, and two local newspapers circulating within the jurisdiction of this Honourable Court.

“AN ORDER OF THIS HONOURABLE COURT compelling, directing and mandating the Defendant to cause the said public apology to be announced at 9:00am in the morning on a radio station broadcasting within the jurisdiction of this Honourable Court.

“It is to be noted that Dr. Abdulmumin Yinka Ajia will be asking the Honourable Court to compel, direct and mandate Mr. Ade Alabi to pay the sum of =N=200,000,000.00 (Two Hundred Million Naira) as general damages for his libelous remarks made in the interview granted to ‘Insiderng.net’ on 4th September 2019.”

See copy of the Writ of Summons below: 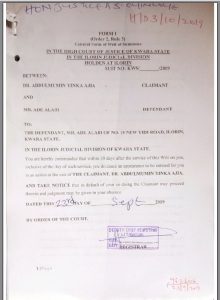 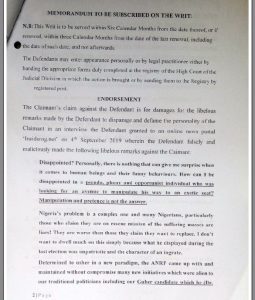 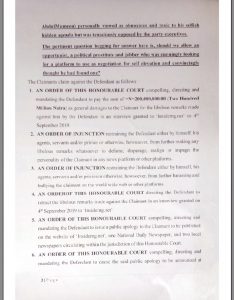 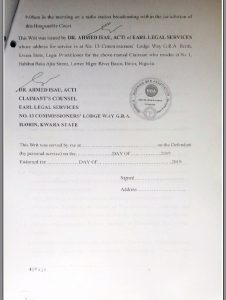 By David Olalekan. Governor Seriake Dickson of Bayelsa State, has reacted to the alleged role former President Goodluck Jonathan played in the emergence of Mr…

By David Olalekan Reports reaching INSIDER indicate that the first military Governor of Lagos State, Brigadier General Mobolaji Johnson is dead. According to his son,…

By Shola Abayomi. The Nigeria Centre for Disease Control (NCDC) has confirmed 5 new cases of Covid-19 in the country, bringing the total number of…

By David Olalekan. The moment Coronavirus surfaced in Nigeria, the government agencies responsible for health matters swung into action. The Nigeria Centre for Disease Control…

By David Olalekan. Less than 24 hours after hosting a house party to celebrate her husband’s birthday, popular comic actress, Funke Akindele has been arrested…

By David Olalekan. Some youths in Agege Constituency have berated the Speaker of the Lagos State House of Assembly, Hon. Mudashiru Obasa for distributing loaves…

By David Olalekan. Popular actress, Funke Akindele has come under fire for hosting a party at her Lagos residence, despite the ban on social gatherings…

By Shola Abayomi. The Nigeria Centre for Disease Control (NCDC) has confirmed 10 new cases of Coronavirus in the country, bringing the total number of…

‘I did not dishonour your own father’, Saraki tells Governor Abdulrazaq

OPINION: Who is giving the Sarakis a bloody nose?

Lankotheory teams up with Insider Self Devt. Centre for ‘Success Bound’ conference